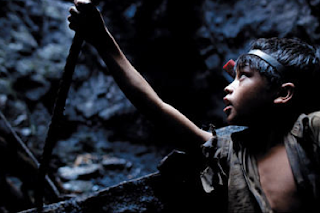 A few fortunate kids would bury their heads inside books rather than inside dark inhuman rat-hole mines of Jaintia hills, thanks to the initiative of some journalists from India and France.

Sunil Pradhan and Gautam Rai (names changed) are just a few victims of child labour. They have been scrapping coal from the dangerous rat-hole mines of Jaintia hills district for years now.

But, after a team from France 24 channel came to report about child labour in the coal mines and subsequently saw the plight of children pledged to sponsor the children’s schoolings and take them off the mines. Some Indian journalists too have taken the same initiative.

Now Sunil and Gautam would be lodged in the Pashupati boarding school on the Indo-Nepal border. Both the kids say they are looking forward to experience the new world under the Sun.

The kids belie their age of 14 years and speak maturely about the “dangerous world” they live in. They claimed to have seen several people die in the mines due to roof collapse, flooding and infighting.

“There is lot of fight after consumption of alcohol and gambling. We have seen it and want to leave this place. We got into mining to support our families who are very poor and have no source of income,” Sunil and Gautam echoed.

Mine owners pay about Rs. 1500 for ten coal filled carts measuring about two sq meter. The children said they need two-three days to fill those carts labouring from 6 am in the morning to 3 pm in the afternoon.

“We frequently fall sick as the mines are on most occasions flooded with water. Moreover, Malaria is very common near the mining areas,” the two children said.

The state government remains a helpless bystander to the whole issue as it says that mines are privately owned and therefore the mining department has no say over these unregulated mines.

In fact, Meghalaya deputy Chief Minister in-charge mining Bindo Lanong dismisses the presence of children inside the mines " as children playing and not working there as child labours."

Due to this, there are conflicting figures as to how many children are working in these rat-hole mines. NGOs give an astounding figure of 70,000 children; the government’s claim is 220.

“Some of the international companies are now inquiring if coal is mined by children in Jaintia Hills. They are going to stop buying the coal if that is the case. We have presented our case to them,” Hasina Kharbih of Impulse NGO fighting for the children’s right claimed.
at April 03, 2011